What kid didn’t have a playhouse growing up? Mine was nestled in the space between four trees where I cooked pretend meals using chunks of broken asphalt and mimosa seed pods as stand-ins for hamburgers and string beans. But perhaps no abode of childhood imagination could rival the million-dollar playhouse built in 1927 by John D. Rockefeller Jr. and his wife Abby for their six children. With indoor and outdoor swimming pools and tennis courts, basketball court, squash courts, a billiard room and bowling alleys, the Rockefellers recreated on a grand scale.

Now, the sprawling Tudor-style structure, known simply as The Playhouse, has been donated to the National Trust for Historic Preservation at the bequest of the late David Rockefeller, one of the six children who played there.

The Playhouse, two guest houses, and 63 acres, representing about half of David Rockefeller’s estate, will join a collection of structures, including Kykuit, known as The Pocantico Center, used for conferences and meetings and managed by the Rockefeller Brother’s Fund. David’s house and 75 acres were sold earlier this year for $33 million, fifty percent more than asking.  It is believed the land and house will be used as a private home, but the possibility of development still looms.

The Playhouse and its surrounding land however, will be protected. The property will remain to serve not only the Rockefellers, who will continue to hold meetings there, but also the public.  Through the Pocantico Center, The Playhouse will be open for public lectures and cultural events.  If your group meets eligibility guidelines, you might be allowed to hold a meeting there and see inside what was once the private world of the Rockefellers.

Set back from Bedford Road, The Playhouse is barely visible to passers-by.  Unlike the English aristocratic estates of the 17th and 18th centuries whose primary purpose was to flaunt wealth, Pocantico Hills has always been about privacy.  The Playhouse was created to provide a safe and private place for the Rockefeller children to play and later was the site of large family gatherings.  According to the New York Times, every Thanksgiving, the son’s wives would take turns putting on dinner for the entire family at The Playhouse.  David’s Hudson Pines cattle farm held its presale galas there with “butlers and waiters everywhere, just like you see on TV,” according to one suitably impressed attendee.

The Playhouse, which also has dining rooms and living rooms, and a reception hall, will be altered somewhat to suit its new purpose.  A ribbon cutting will take place this month to mark the property’s transition from a privately-owned piece of the most magnificent Hudson River estate ever built, to a public amenity where you might also play.

For more about The Pocantico Center and to apply to hold your event there, visit www.rbf.org/pocantico/about-pocantico-center.

ShareTweetShare on Google+Pin on PinterestSend with WhatsApp
109 recommended 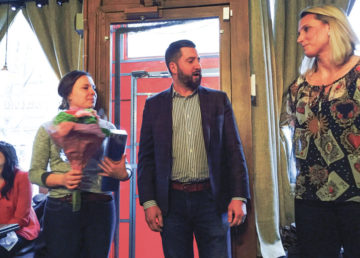 by Barrett Seaman –  Nick Campbell has trouble saying “No.” Having only just opened his insurance business in Irvington last year, he went to an event put on by the irrepressible Maggie Segrich, who was promoting the idea of forming a new four-village chamber ... END_OF_DOCUMENT_TOKEN_TO_BE_REPLACED

By Barrett Seaman It’s not news that there is a shortage of parking in the rivertowns. But it is news when a local restaurateur, owner of Dobbs Ferry’s The Rare Bit, comes up with a plan to help reduce congestion AND help local businesses, including his own. A... END_OF_DOCUMENT_TOKEN_TO_BE_REPLACED

The Family YMCA at Tarrytown: A Valued Community Resource